Be My Grl - A contemporary romance set in Western Australia 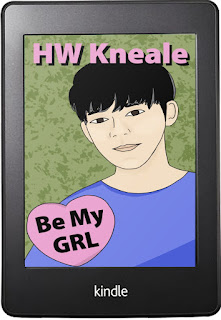 Let me introduce Be My Grl.

Ros Wilson had only meant to return a mis-posted package to the original sender. She never meant to have her demisexual world shaken by the thought of a hot, sweaty man, where his T-shirt clung ever so—

No. Enough of that. Sex was never her thing. She never had a crush, she never got all hot and bothered over a celebrity, she never had a single stirring in her loins. Ros was content with her job, her foster kittens and her lack of sex life. (Or was she?)

Then she met Everett Pak, with his exquisitely carved wooden boxes and delightful candy hearts. While it was nerves/lust/love? at first sight, Ros thought she'd never see him again, until her housemate texted him a flirty picture of Ros. (Honestly!)

Was Ros ready for this? Was she ready to give over her heart? Could she give more? Or would her own hang-ups ruin what promised to be the best thing to ever happen in her life?

Last year I wrote this contemporary novella for the "Be Mine: Valentine Novellas to Warm the Heart" anthology. This anthology was a limited run a bunch of us did for fun.

Then I entered it in the RuBY awards by Romance Writers of Australia. Go me.

Then I realised, if I won the RuBY, people would want to buy it and read it. So I commissioned a whimsical cover from a university graphic design student I know and I stuck it up on Amazon.

It's funny and sexy and not much like what I usually write. Also: it's got sexytimes. If you're of my delightfully large fanbase that prefers my cleaner reads, this is not for you.  But if you're okay with a little brown-chicken-brown-cow Spiciness in your Romance novellas, feel free to check it out.

Free to read on Kindle Unlimited. Might as well give it a go. It features foster kittens.

Her Grace likes stretching her limits.

On Facebook I am attending Concellation 2021, an online convention to make up for all the conventions that were cancelled in 2020. (I'm quite enjoying it!)

One of the recent discussions was about fan fiction, and authors who strongly discourage it (and why).

Fan fiction is something I don't worry about. I do think about it, from time to time. Used to even write it, a long, long, LONG time ago.

Personally, I am not opposed to fan fiction. It serves a useful purpose for the developing writer (says she who has written fanfic in the past, clandesinely, of course). I don't object to fanfic of my own works by fanfic authors.

That said, if/when there is ever fanfic created for my works, I can't read it. (No matter whether I want to or not.)  This is to legally protect my Intellectual Property (IP), and maybe someone else's, maybe. But mostly mine.

For example, what if I write the next story in a series features certain characters, plots, etc, and it turns out some smart cookie dreamt up the same idea and wrote fanfic of it? If I was in the habit of reading fanfic, there's a good chance that feelings would get hurt. Doesn't matter if I saw the story or not. If I read fanfic, the possibility exists. So, my policy is I can't read any fanfic of any of my works. Sorry.

You want to write fan fiction of my work? Go ahead. For the most part, I will not mind (with caveats. Your work causes me legal or personal problems, then me an my attorneys will start paying attention). In my experience, fan fiction is mostly harmless, and could be considered a form of flattery.

But do not ask me to read it. Certainly don't ask me to bless it, or verify it or even acknowledge it. Keep it to yourself and may it bring you personal joy.

Posted by Her Grace, Heidi, the Duchess of Kneale at 7:46 pm 8 comments: