I went to a family funeral yesterday.

Arthur "Jack" Johnson, age 92 was laid to rest. He was the patriarch of the Johnson family, to which my nieces belong. I was considered a close enough connection to be able to sit with the family and help attend the nieces while their father helped with the funeral and their mother mourned her grandfather.

I've known Jack, his wife Josie and their family for more than fifteen years and have been connected to them by marriage for nearly as long. Jack was one of those men with a great sense of humour, who instantly brightened a room when he entered it. His pockets were full of lollies and his heart full of jokes.

This is a guy who will be sorely missed.

An interesting thing about Latter-Day Saint funerals, they're  not as grief-stricken as you'd expect. It comes from the Latter-Day Saint beliefs regarding an afterlife and of the eternal nature of family connections. Sure, you'll miss someone when they're gone, but it's not a forever thing. Families are forever. That's what's forever. Not separation, not death.

I thought it was lovely that the great-granddaughters wore pink. Grandma Josie wore green, in which she always looks good. Aunt Margaret, who couldn't be at the funeral because she was on the other side of the planet, sent along a video so she could be part of it. All the men wore a sprig of rosemary for remembrance; I had to explain its significance to a niece, because she thought they'd all lost the flowers to their boutonnieres.

The music was lovely, the jokes were appropriate and the floral tributes were tastefully nice.

Bowra & O'Dea did the funeral and they did a nice, respectful job.

After the funeral we went to a beautiful cemetery for the interment. There were peacocks, which delighted all the grandchildren. For Grandma Josie and a few of the more pregnant members of the family there were chairs.

A few good words were said and the grave was dedicated as per Latter-Day Saint ritual. Then, to some very Jack-appropriate music, the coffin was lowered into the grave, and the family got to toss in rose petals.

Then the tarps were removed from the gravedirt and the men of the family didn't just toss in a symbolic shovel. They got to completely fill in the grave. I thought this was a lovely, cathartic practice. I want this at my funeral.

Lives begin and lives end. I aim to do the best I can in between to make sure my life has as positive an impact as Jack's did.

Rest well, Pappy. We'll see each other again (just, not that soon).

Wherein I talk about being a pro author

I have a guest post  over at Maggie Elizabeth Writes on Being a Professional Author. It's not about the money, it's about the attitude.

Maggie's a fellow My 500 Words writer. I'll be featuring her later in my Friday Interview series.

Writing income is variable, and not necessarily the best marker for determining if someone is a professional author. In this industry, it's not the dollars-per-hour that determines your professional status, but how you approach the craft and the discipline. I know several professional authors who have yet to make a dime (note, I said yet). If they continue to persist, their time will come.

It's like this in the Fine Arts. You've got to put in your chops and prove yourself before you can see a financial return. Or as the musicians put it, "gotta pay your dues if you wanna sing the blues."

Feel free to comment on Maggie Elizabeth's blog if you agree or disagree with what I've stated.

Fan-fiction: what it means for the professional author

About five years ago fellow author Gail Garriger wrote a thoughtful post about "Fan-Fic, Fan-Make & Other Issues". Worth a read, since she's so very good at putting things in a genteel manner. The reason I mention it now is because some writerly friends of mine were discussing that post the other day.

Also, I reference to this first because of all the authorial opinions I've read (JK Rowling, GRR Martin, et al), this is one of the best-phrased.

I confess I haven't thought much before about fan-fiction, and the impact on a professional author. Perhaps I should. After all, I plan on being very prolific as an author over the next fifty years and that's bound to attract several fans, some of whom will be inspired by my works.

Now I've got to consider fan-fic from the point of a pro author. For me, this is something new.

I confess to a teenage indulgence in fan-fic, both the reading and writing thereof. As I realised it was taking precious writing time away from my personal projects, I weaned myself off it. (note: any fan-fiction I ever wrote was pre-Internet and has never been posted online. I kept it rather personal. Any existing copies are handwritten in notebooks and are probably mouldering away in some cardboard box in my parents' basement.)

Will I ever write fan-fiction again? Most likely not. I've got far too many novels of my own clamouring to be written.

Fan-fic was fun. Fan-fic was great. It allowed me to play in someone else's created universe, especially during a time when book releases were a year or more apart. It was good training during my apprentice years in some aspects of the craft. But my dalliance with fan-fic was from the view of a fan. First and foremost in a fan's heart is love of someone else's created world. That's what drives most of fan-fiction.

It's the fraction of fan-fiction driven by other motivations that have caused me to put some thought into this subject now.

Several years ago I was entranced with the thought that someone would want to write fan-fic of my works. I considered it a potential compliment. Had I inspired a reader enough for them to want to spend more time in the worlds I created? Did I ignite a creative spark within them? To me, it was a form of flattery.

My attitude is changing.

In 2012 LiveJournaler "Oh No They Didn't!" featured a post with several authors' opinions regarding fan-fiction. General consensus: opposed to various degrees. I see their point, especially from the professional author's point of view.

As for fan-fiction derived from my novels and characters--my thoughts? I like Gail's attitude. If anything has been written regarding anything in my creative sphere (worlds, characters, storylines) that I didn't write, I can't read it. Don't ask me to read your fan fic, don't post it somewhere I am likely to come across, don't email/post/sing it to me. I can't know about it.

And by all means, certainly do not make a profit from it. If anyone with legal financial interest in my creative works (i.e.: my agent, my publisher, my estate, etc) comes across fan-fiction (or unauthorised anything, really) based on said creative works that has created profit, you can bet there will be some legal action going down. You're not just dealing with me. You're dealing with everyone who is supported by my writing. And they may not be as nice as I am.

I am happy that my books have sparked an ember of joy in your hearts. That's why I published. But if you are so inspired to write, and you are driven to profit, I recommend you do as I did and seek to profit from your own 100% original works.

Posted by Her Grace, Heidi, the Duchess of Kneale at 2:00 am No comments: 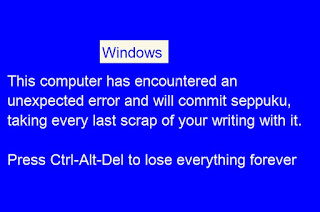 The other day fellow Romance author Julia Quinn suffered a computer hiccup that caused three newly-written pages of her WIP to go missing. That sort of thing make you want to freak out when it happens to you.

Thanks to a clue from a fan and some deeper digging, she was able to find a copy of those three pages hidden on her computer.

And there was much rejoicing and grateful sharing of some really nice prose on her Facebook page.

Most writing programs have a little temporary file backup they create of works in progress, just in case the computer goes *hiccup*, as they are wont to do. These backup files have saved my sweet rear end more than once. (They have also made me look like Scotty at work on occasion.) However, if the computer works as it should, and you close down the program properly, those temp files most likely are not kept.

By day, I'm an IT professional and have been for the past twenty-five years. I know a LOT about computers, how they work, how they fail, and have personally seen some of the absolute worst things that could possibly happen to data.

Back up your work.

Do it regularly, do it frequently, do it multiple times, places, methods. Don't just rely on a single thumb drive to hold the unique contents of your laptop. Make more than one copy, and store at least one of those copies off-site. Don't keep all your backup copies together in the same location as your original, ie, that thumb drive in your laptop bag.  (Now, don't get me wrong. I'm not disparaging the delightful thumb drive--far better than the floppy disks they replaced. Just don't make a thumb drive your only backup.)

If your computer dies, if your laptop is stolen, if your house burns down, do you have access to your backup copies, should you need to restore to new hardware?  Consider keeping DVD copies of your work at a friend's house or at the day job, and keeping stuff in some cloud somewhere.

You have been warned.

Posted by Her Grace, Heidi, the Duchess of Kneale at 3:16 pm No comments:

I've got a guest post up at Tara Maya's blog BestFantasyNovel.com wherein I speak about why I love escapist fiction so much. (Spoilers: I used it to escape from the miseries of real life.)

Shameless plug: Tara Maya writes the kind of fiction (Fantasy Romance... or is that Romantic Fantasy) I love.  I'm totally digging her series The Unfinished Song.


The Escapist Nature of Fantasy Romance

Let me know if you have experienced the same desire to escape reality.