The Benefit of Imaginary Friends

The other day I was thinking about Mr Peach and Mrs Outway. Mr Peach is my butler and Mrs Outway is my housekeeper. I've got a whole swathe of household staff, from Peach & Outway through kitchen maids, laundry maids, footmen, and scullions. (His Grace's valet is Jack and my lady's maid is Jessica.)

And not a single one of them is real.

Staid, boring mundane types might consider that a sign of a few screws loose, but what it really is is the opposite--it's a sign of mental stability.

The presence of "imaginary friends" or fictitious people is a human's way of creating the idea of another human being outside of oneself thay will fulfill a social need in a person. Many children invent an "imaginary friend" of some kind to serve a very real psychological need. Sometimes it can be as simple as a play companion, but in certain circumstances, the child may create a defender or protector to give them the sense that they may not be as powerless as they feel. This is often the case for children who have been abused or neglected somehow.

For me, I've invented a whole household of staff because I hate housework. Loathe the stuff, really. Can't stand it.

But it has to get done. Since my heart cringes at the thought, I have delegated the tasks to the household. Mr Peach makes sure the staff do what they have to do. Kim (from Southeast Asia) is in charge of the kitchen. Jack & Jessica make sure clothes and other bedchamber stuff is neat and tidy and Mrs Outway makes sure things run smoothly overall. The footmen are there for odd little tasks and the gardeners (of which there are two) keep the yards squared away. The laundry maids can be a handful, especially with their use of magic when it comes to washing clothes, but Mr Peach is more than sufficient to deal with them.

And so when I'm busy washing dishes or hanging out clothes, I deceive myself by withdrawing into my imagination and assume that it's not really me doing the work, but someone else.

And thus the housework gets done.
Posted by Her Grace, Heidi, the Duchess of Kneale at 1:56 pm No comments: 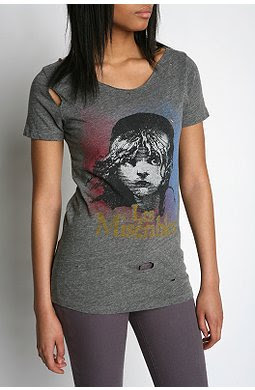 I have a box of T-shirts from my younger days. This is my box of Memory Shirts.

For years it lay hidden in the back of my shed until it was time to move house. I kept the box instead of donating it, as I did with so many other items of clothing.

I didn't open it again until a few days ago.

As it is autumn in the Southern Hemisphere now, the nights aren't as warm. I offered my daughters some T-shirts in which to sleep and went digging in the box for Memory Shirts.

The first I pulled out was a gray Les Miserables shirt I acquired in New York in 1990. I was on tour there that summer with the Granite Youth Symphony, and one of the many activities was to go see a real live Broadway Show--Les Mis.

It was wonderful! I bought this T-shirt in commemoration. (I also acquired a T-shirt that says Carnegie Hall. I'll let you guess that memory.)

I think often and fondly upon my GYS days. Even dreamed about it last night. I still keep in contact with many of the friends I made there. Good memories.

For the other daughter, the next T-shirt I pulled out simply said "Star Trek".

This T-shirt I acquired in a box of auction goodies at a Star Trek convention. The auction had gone on too long, and they'd run out of time. So what they did was say, "We've got a whole box of stuff left over. What will I have for this box."

I conspired with a friend of mine, Karen J, to go in together to buy this box. We managed to outbid this one guy to the tune of US$290.

Oh, what a jackpot! There was a leather varsity-style jacket that Karen claimed, a Star Trek umbrella, figurines, books and, of course, the ubiquitous T-shirts that peppered the fandom.

I loved being a part of the Star Trek Fandom and not because of Star Trek being awesome (because it is). I loved it because the fen were a wonderfully-accepting bunch of people who were not afraid to be who they truly were.

Karen died about ten years ago from cancer, but every time I see this T-shirt, I still think of her.

Most people might have just given old T-shirts to their kids for nightwear without a further thought.

Me, I gave my daughters something to sleep in and a darn good story to go with it.
Posted by Her Grace, Heidi, the Duchess of Kneale at 2:05 pm No comments: