Of course you do.

I'm giving away a copy of my short story "Within Her" (Originally published in Borderlands: The World Within 2001) when you sign up for my Quarterly Newsletter.

Yep, free story just for you.

The next edition of the Quarterly newsletter is coming out end of June, so if you want to be the first to hear all the news of upcoming projects and releases, including insider discounts and more, plunk your name down here and click "subscribe":

Posted by Her Grace, Heidi, the Duchess of Kneale at 5:36 pm No comments:

Her Endearing Young Charms is out today! Have you got your copy yet? 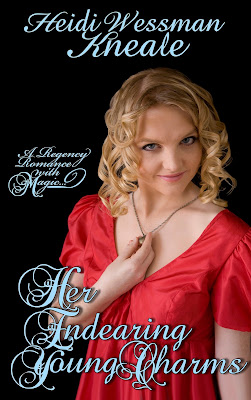 Miss Merribelle Hales spent years imbuing a silver locket with man-attracting charms. On her way to her first London Season, her locket is stolen--along with a kiss--by a highwayman. Her only clue to his identity: a pair of intense eyes. This vexes her. Without her best charm, how will she ever be able to compete on the Marriage Mart? It would be so much easier if she didn't have to compete at all.

Lord Alexander Rochester has worries aplenty. His ailing father's estates are woefully in debt, so he must seek a wealthy wife. His courtship of Miss Hales goes terribly awry with a simple kiss that leads to his slapped face and an accusation of theft.

It's a case of mistaken identity. Alexander knows and fears the real culprit. He faces the loss of his father, his estate and Miss Hales--whom he's loved since childhood--by the hands of the Handkiss Highwayman.

Awesomesauce: Get the Kindle edition of Her Endearing Young Charms free through Kindle MatchBook when you buy the paperback edition from Amazon.

________________________________
Her Grace is off to enjoy some birthday cake. If you enjoyed Her Endearing Young Charms, she encourages you to leave an honest review on Amazon, Goodreads or other reputable book review site. This helps other readers discover great books.
Posted by Her Grace, Heidi, the Duchess of Kneale at 6:27 pm No comments:

A to Z Challenge - recap

So here I am at Stupid O'Clock with a bit of time for quietude and reflection. I made it to the end of another A to Z Challenge. This year was a lot easier (and nicer) than last year. There's a good chance I'll do it again next year.


It was good to be able to visit other fascinating blogs. Some of the blogs I visited and really enjoyed:


You might not hear from me for the next month. May is Birthday Month and I've got a lot of birthdays to cater for. Also, the Rockingham Book Fair is coming up this weekend (I'll be there. Come visit!), Eurovision is the week after and I've got a major project due on the Environment and Climate of Mars and its Potential Habitability (astrobiology).  Much going on.

Meanwhile, it's also the Book Birthday for Her Endearing Young Charms. To celebrate, I'm having a giveaway on Goodreads. May 11-20. Please enter.

þ in your side?

Sometimes I wish we kept the letter þ (thorn). It's a shame it disappeared from our alphabet.

Want to know more? Go google it. While I was touching on some research for the letter þ, I made the mistake of reading the commentary on the bottom of the articles.

Stupid  me. Everyone knows you never read the comments on articles. They're full of aþþholes' vapid opinions.

Labels: A to Z challenge

I love how the English alphabet once considered the stylish ampersand (&) a letter of its own.

I'll use it from time to time as it was intended, but only in casual speech--never formal.

I know it represents the latin 'et', meaning 'and'. Who doesn't? It arose as a form of shorthand that stuck in common usage.

I can understand why it was removed from the English alphabet and have no quarrels over it's demotion.

Question: What are your thoughts on the ampersand as a letter of the alphabet?