Luck in its various forms

A while back, a bit of luck blew my way, literally.  It fled someone else and came to me. I would have returned it, if only I knew who it belonged to. 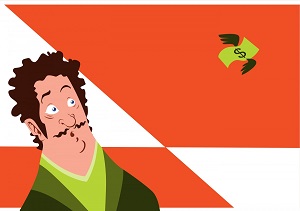 Once upon a time, so long ago that by the time you see this post I will most likely have forgotten about this, I was walking through a parking lot. A breeze was blowing gently when it wafted something leaf-coloured in my direction. I didn't think anything of it initially, as there were quite a few leaves blowing about the ground.

But this one was square-ish.

I recognised a $20 note. Immediately I trapped it with my foot. Looking about, I scanned the parking lot to see if there was any lost soul chasing after their truant money.

This happens sometimes. You go into the shops, buy something for cash, get change, shove it in your pocket and head out to the car. Once there, you pull your car keys out of your pocket, along with everything else, sending receipts, tissues and spare cash flying.

But the parking lot was barren of life. No person chasing flying notes, nobody standing by a car, ignorant of the money fallen out of their pocket. No one.

I had a good, solid look about. Surely someone would miss this $20. It needed to go back to its owner.

Alas, they were long gone. Nobody was about.

So I gave the note a new home in my wallet, climbed into my car and left on my errand. I had to go pick up something, then return to this parking lot for something else.

Fifteen minutes, I had returned. As I walked through the parking lot, something yellow fluttered along the ground. Square-ish.

I trapped it and rescued a $50 note from under my shoe. Fifty dollars.  Further along, another $20 note came skittering along and I rescued that as well.

I looked about. Surely there was someone who was losing money. Someone? Anyone?

For a parking lot full of cars, it sure was devoid of human life.

So there I was with $90, and no way of finding the original owner.

While I am happy to be a few dollars richer (for it did buy some needful medicine for one of the family), my heart aches for the poor soul who had lost it.
Posted by Her Grace, Heidi, the Duchess of Kneale at 12:30 am No comments:

The Plot behind Cats the Musical

Apparently, there's a movie coming out based on this musical, and the interwebs are of mixed opinion.

One of those opinions is that Cats the Musical has no plot.

Not true. It does have a plot. It's an uberplot, and therefore may be a bit difficult for some people to grok, if they're not used to analysing uberplots.


In the world of the Jellicle Cats, there comes a time when a cat has an opportunity to be reborn into a new life during a brief window of opportunity.  This is called "ascending to the Heaviside Layer."  Turns out, the Heaviside Layer is an actual place in Earth's ionosphere. It's known for its ability to bounce radio waves back to earth. This is a metaphor for a cat who's died, returning to earth for a new life. Nicely poetic, once you know.

Who is the lucky feline? That is determined by the patriarch of the kindle, Old Deuteronomy. Why him?  Maybe he was the last one to be reincarnated, and has that extra layer of wisdom to choose the best candidate. One thing's for sure, he's been reincarnated many times, maybe the most times, and thus, has seniority. He probably knows the qualities that make for the best reincarnation candidates.

One by one, certain cats present their cases as to why they should be reincarnated.  Some present their good deeds (Jennyanydots), or their high standing in society (Bustopher Jones) as reasons for their candidacy. But not all cats are worthy. Mungojerrie and Rumpleteaser are quite mischievous, whereas Macavity is downright evil.

Some cats are supported by others in their candidacy, but not all cats are welcome. Grizabella, who was once a beautiful and glamorous cat, is now old and ugly. The "virtue" that had set her apart in her younger life is now gone, and for that she is scorned. But underneath, Grizabella is not bitter and ugly about the loss of her beauty. Along the way, she discovered the true meaning of happiness, and has never forgotten. As she aged, she never treated the other cats with spite or scorn or shallow judgements. Even when they drive her off, she does not bear them any ill will.

Not all the cats are happy to see one of their ascend.  To prevent the choice from happening, Old Deuteronomy is kidnapped. Without him, the choice can't be made. What does that mean? Is it that no cat gets a chance to ascend, or that the cat who could have ascended, doesn't, and dies forever instead? Dire thoughts indeed.  Much could be read into the reasons behind O.D.'s kidnapping (it was by Macavity). Did Macavity do it to take O.D's place and choose his own candidate, possibly himself, knowing he wasn't worthy, and this could be the only way?

Regardless, the best needs be chosen. Overall, the cats agree that O.D is the best one to choose, and a rescue is mounted. Yay for the good guys.

Old Deuteronomy knows Grizabella, and that her beauty is more than skin-deep. Thus, he chooses her as the candidate to ascend to the Heaviside Layer and thus, come back to earth in the next incarnation of cats.

And that's the plot.

A few weeks ago someone asked me... well, they didn't ask me so much as accuse me of never using foul language. You know, four-letter words, crude language, cussin'. Saying #%cK.  Originally, their purpose was an attempt to shame me for my language choices. Their reasoning: children can't use foul language, but adults should. Not "could", but should. At least, that's how they explained it to me. Adults were supposed to cuss.

Their explanation did not hold water with me, because the children in their circle used language as blue as any adult I've ever heard. My choosing not to use foul language, in their eyes, meant I was either too immature to know I could, or that I was too timid--a coward, essentially--to admit I was an adult.

Also, I knew the real reason behind their accusation: they were making a stand against my culture and my beliefs. They thought if they could shame me and force me to defend myself by showing that I could use foul language, then they would simply have used that against me by saying I'd betrayed my beliefs, et cetera, et cetera.

Puh-lease. I'm a middle-aged woman. We don't fall for that kind of cheap trick. If anyone ever tries to pull something like that on you, know that it's a dick move, and don't be afraid to call them out on it.

I choose not to use foul language because it's not part of my brand.

This audience is huge.  (Hello, lovelies!  Buy my books!)

What about the audience that isn't afraid of foul language, who don't mind the occasional cuss word?  Guess what?  They also buy books free from swear words. Rare is the reader who will get offended by someone NOT using foul language. They are not my audience. Let them go buy someone else's books.

This is not to say that I go around substituting "Fetch" for "#%cK and Gosh-darnit for G@#d@#%n.  That's not how this works. This is like a vegetarian trying to substitute Tofurkey for a beautiful filet mignonette. You don't substitute. You find a completely different way of expressing yourself. You order the beautiful Black Lentil Daal and enjoy it for its true beauty.

So, you're writing along and come to a moment when a real person might say, "#%cK you!" But would your characters say that? If it's simply not a part of their character, they'd say something else.

One of my favourite moments is in a BBC version of Pride & Prejudice where Lydia tells Kitty to "save your breath to cool your porridge." That line cracks me up but also conveys Lydia's frustration with her sister perfectly.

The whole idea is to express an emotion. A clever author will know a dozen ways of doing this without compromising their brand.

So, back to branding. My characters don't cuss, especially not the way 21st Century westerners do.  I don't write contemporary, so I can get away with this much easier than contemporary authors can.

In the culture I grew up in, adults didn't cuss. Who did? The outsiders, the rebels, the lower class, the uneducated, the disrespectful. For me, my experience taught me that curse words took away from a character's nobility. It reduced them, somewhat.

I don't want that for my characters, so I come up with other ways for them to express themselves that is true to their character and doesn't compromise my brand. After all, I want to deliver what my readers expect.

When I go out in public as an author (like to a convention or something), I want to maintain my author brand. When a potential reader meets me, I want to leave the kind of impression on them that would reflect what they'd encounter in my books. My potential readers cherish certain values. If my outward behaviour does not match those values in their eyes, they would have no reason to consider picking up one of my books. I would have betrayed myself and lost a potential fan.

No four-letter word is worth that.

Posted by Her Grace, Heidi, the Duchess of Kneale at 12:41 pm No comments: