The Wild Rose Press is having a Cyber Monday sale.

Feel like some escapist fiction with a happy ending?

AS GOOD AS GOLD

Daywen Athalia wants love--true and lasting. Fearing a future of bitter loneliness, she seeks help from a gypsy woman. The price: a hundred pieces of gold. Daywen's never had two shillings to rub together in her life. Where's she going to find a hundred gold pieces?

Bel MacEuros made a career of theft from fey creatures. When the cursed gold he rightfully stole from a gnome is taken from him by Daywen, the consequences could bless or break his life.

It is not the gnome's curse or a gypsy's blessing but another magic, far deeper and more powerful, that will change their lives forever.

FOR RICHER, FOR POORER

The Deveraux line is famous...for a family curse. The rich must marry the poor or lose their prosperity. Peter Baring is the last of the Deveraux and sinking slowly into poverty. But will marriage to his icy business partner save him?

Beatrice Nottham dreams of leaving Earth for a fresh start. But only married couples are allowed to move off-world. Marrying a man she’s unsure she loves will solve that problem...but at what cost?

Labels: as good as gold, For Richer For Poorer, heidi kneale, sale, The Wild Rose Press

Taking a break from NaNoWriMo and a momentary panic from a mixup with a galley and a novel that hates me and two final exams to indulge in a bit of TASE Day and some dreaming.

My first dream career (at age 3) was to be an Opera Singer. (FYI, I'm a coloratura mezzo-soprano, though I haven't had much operatunity to sing of late.)

My second dream career (and one that sustained me for the next 40+ years) was to be an author.

My third dream career (at age 8) was to be an astronaut.

Recently learned that NASA's looking for more astronauts.  Anyone can apply if they meet the criteria:

1. Bachelor’s degree from an accredited institution...

YES! I got one of those!

Oh, okay, ne'ermind.  (Regretting not staying in biology for five seconds. However, my Bachelor in Arts has served my career well so far.)

2. Degree must be followed by at least 3 years of related, progressively responsible, professional experience...
Ah. I assume they mean STEM experience? Got plenty of the Fine Arts experience. Give me a few more years out staring at the stars and getting papers knocked back by ApJ and this could change.

Don't think I've even been a passenger in a plane for a thousand hours, much less clocked that amount of flight time.

2a. An advanced degree is desirable...

...and may be substituted for experience as follows: master’s degree = 1 year of experience [etc] ....

Now, my big question is, if my master's is in a STEM field, would that make up for my lack of STEM in my bachelor's degree?

...is considered to be qualifying experience for the Astronaut Candidate position...

...provided degree is in a Science, Engineering, or Mathematics field.

3. Ability to pass the NASA Astronaut physical, which includes the following specific requirements:

Bother!  My eyesight is bad, alas.  We're not talking a slight nearsightedness. And I've got presbyopia*. The only correctable surgery that would bring my eyesight to the correct acuity would be a reshaping of my orbit cavities. That technology is still a ways off.  Unless they let me wear these funky astronaut eyeglasses, I'm out of the running: Do you also dream of being an astronaut? Are you better qualified than I am? If so, go apply for Astronaut School and see if you can get in.

Meanwhile, I might see if they let middle-aged women into Space Camp.


*Presbyopia: you can spot who has presbyopia because they're the middle-aged people who have to hold restaurant menus at arms length in order to be able to read them. I developed presbyopia about five years ago.  His Grace, who exceeds me in age, has yet to develop it (or he might have and doesn't want to admit it).

By an act of serendipity, I got the whole of November off from the Day Job.  So glad I did. It's turned out to be a month of insanity.

Originally, I took the time off work for NaNoWriMo. Thought I'd be brilliant and see if I could crank out 100K words. Hah! I dream big, don't I?

I'd forgotten that I am also studying, am a Relief Society secretary and have the end-of-year stuff for the offspring as well.

I have one exam next week and another the week after. We have a new Relief Society presidency; I'm providing necessary momentum for them to get into the swing of things. I've got galley reviews for Marry Me. A close friend has a wedding. I've got a milestone birthday in the family. Thanksgiving and a Christmas party. Support for offspring and end-of-year stuff (as the Australian school year ends in December). Also the usual cleaning, house maintenance, lawnmowing, etc and rhinoviruses that have a terrible sense of timing.

Am I getting everything done?  Yep. Am I making the minimum NaNo goal of 50K?  Maybe. Am I dropping any balls? Sure, plenty of them, but only the ones I know will bounce.

I am learning the fine art of Saying No. Am also ditching the unnecessary bits of the Internet so I can have a few more minutes for the things that Must Be Done.

If it doesn't need to be done, it ain't gettin' done.

And I don't feel a single jot of guilt for it either.

MARRY ME by Heidi Wessman Kneale 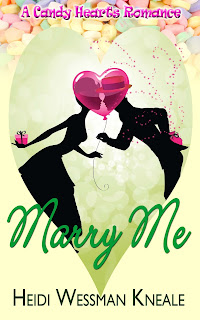 In 1905 New York City, affluent Millie Moore wants to be outspoken like the suffragettes she admires. She also wants to rid herself of an annoying and controlling suitor. For a well-brought up young lady whose mother fears her impending spinsterhood, speaking her mind is an uphill battle.

When Raymond Wilson sees Millie at a rally, it’s love at first sight. Not wanting his stutter to ruin his chances, he enchants a little candy heart to do his talking for him.

For Millie, Raymond is a breath of fresh air. And maybe, just maybe, someone she could love. But for her social-climbing suitor Guy Wilson, he’s a threat to his plans. And Raymond isn’t the only one who knows something about magic. Now the ante has been upped and Millie is the prize…

The length of a meter is... Amazon?

As a reader, I don't use Amazon. This is because I'm in Australia. Until  v e r y  recently, Amazon hasn't been terribly Oz-friendly. (They have created amazon.com.au, but that's a digital-only marketplace. If I want a hard copy of a 99c on-sale novel, I still have to pay $20 shipping. Ouch.)

But a significant part of the English-speaking world does use Amazon, and its rating system for novels tends to be the go-to standard because of sheer volume. Success often is measured by Amazon stars and sales rankings.

Want an accurate rating of a book? Go to Amazon. People post their reviews there left, right and centre center. Wanna know how well a book is selling? Check out the sales rank.

As an author I understand the value of Amazon ratings, especially when it comes to marketing. I've read several books by authors I would love to promote by Word-of-Mouth. The place I feel my opinion would have the most bang would be on Amazon. But I can't. I don't buy from Amazon. Amazon won't let me post any reviews because I haven't bought anything from them.

Oh, I'd love to buy my digital books from Amazon just so I could post an honest review. In theory, I could and read them on my laptop with a Kindle app. My only issue is the emissive nature of my laptop screen (ie it glows under its own power).

I love my Kobo ebook reader because of its e-ink display. It's reflective, not emissive. The light by which I view it is due to the ambient light of the room. I find an emissive display hard on the eyes after a few hours. When I read a book, I often find myself immersed for hours, if not days on end. I want to read books in a format that's easy on my eyes. A laptop can't do that. An ereader can.

(I did consider a Kindle once, but it was more expensive than my Kobo, didn't have quite the bells and whistles that my Kobo HD Aura has and, at the time, had poor customer support because I'm Aussie, oy, oy, oy.)

So where do I get my books? The KoboStore. Quick, easy, and new purchases are on my ereader ready to go in a matter of seconds.  The only thing I don't like about the KoboStore is that its users rarely use their star ranking system. I will, but I am only one of a very few handful. Because there are so few ratings, my opinion becomes mostly useless.

Now, I will go to GoodReads and post reviews. That has some clout.

Not as much as Amazon, which seems to have been adopted as the gold standard when it comes to overall opinions on what's good and what's bad. If I could get books in .epub format from Amazon, I'd certainly buy more books over there, especially books I intend on reviewing.

Until then, if you are interested in my opinion, I am on GoodReads from time to time.

Do an author a favour; go review someone's book.